What is Flexor Hallusis Longus Tenosynovitis ?

Flexor Hallucis Longus (FHL) Tenosynovitis is sometimes referred to as “dancer’s tendonitis”. However, while FHL tendonitis has historically been described within the context of dancers, especially classical ballet dancers, symptoms have also been reported in others.

At risk individuals include those who require repetitive forefoot push-off and extreme Plantar Flexion, such as swimmers, ice skaters, long distance runners, and gymnasts. FHL tenosynovitis classically causes pain at the postero-medial ankle, specifically the region of the fibro-osseous tunnel. Pain has also been reported at the knot of Henry and at the level of the sesamoids. 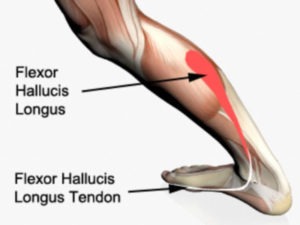 The Flexor Hallucis Longus (FHL) Tenosynovitis originates from the posterior border of the fibula and interosseous membrane of the leg. The FHL passes through the retinacular structures at the postero-medial ankle (fibro-osseous tunnel), the plantar midfoot (knot of Henry) and the sesamoids (inter-sesamoid ligament) before inserting at the base of the distal phalanx of great toe. At all three of these retinacular structures, excessive constriction and abnormal stresses may occur. The Flexor Hallucis Longus (FHL) Tenosynovitis is a component of the tarsal tunnel and within the tunnel it lies posterior to the neurovascular structures. At the level of the knot of Henry, the FHL is dorsal to the medial edge of the plantar fascia. The blood supply to the FHL arises from the posterior tibial and medial plantar arteries, while the tibial nerve provides innervation to the muscle.

The primary function of the FHL is to plantarflex the first metatarsophalangeal (MTP) and interphalangeal joints and to serve as the primary restraint to passive dorsiflexion at the first MTP joint. Moreover, the FHL contributes as plantarflexor at the ankle joint and as an invertor at the subtalar joint. 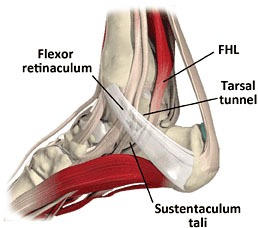 Patients with FHL tenosynovitis often present with pain at the posterior or postero-medial ankle. However, the site of symptoms can be variable and depends on the anatomic location of the tendon pathology. Heel pain, plantar midfoot pain, and first MTP joint pain have all been reported.

Although pain is the most common presenting symptoms, limited MTP joint motion.

Pathology includes tenosynovitis, partial longitudinal tears, and nodularity of the FHL due to intra-substance degeneration. While the exact etiology is debated, many authors believe constriction occurs at the fibro-osseous tunnel in the posterior ankle, the knot of Henry in the midfoot, and the inter-sesamoid ligament. This pseudo-entrapment induces repetitive micro trauma leading to microscopic and macroscopic tissue damage.

It has been observed that there is relative incongruity between the FHL and the fibro-osseous tunnel when the foot is fully plantar flexed, which is postulated to cause abnormal stresses and resultant tenosynovitis. Injury at the level of the talus may be due to an abrupt change in direction at this level.

Additional etiologies may relate to a low-lying FHL muscle belly or an accessory flexor digitorum longus.

FHL tenosynovitis can be classified by anatomic zone:

Zone 1 is posterior to the ankle joint,

Zone 2 is from the fibro-osseous tunnel underneath the sustentaculum tali to the knot of Henry, and

Zone 3 is from the knot of Henry to the FHL insertion at the base of the distal hallux phalanx.

The diagnosis of FHL tendonitis can be made primarily by tenderness to direct palpation. Reduced first MTP motion and/or IP motion and triggering of the FHL due to degenerative nodules within the tendon may be present. Clinical examination of the FHL includes specific attention to 4 regions of the foot and ankle: posterior ankle, sustentaculum tali, plantar midfoot, and the level of the sesamoids. During examination, the ankle and hallux are held in either a neutral or dorsiflexed position to place the FHL under tension. Proximally, the muscle belly and the musculotendinous region are palpated just posterior and lateral to the posterior tibial tendon. Medially and inferior to the sustentaculum tali, the FHL can be palpated as it courses through the fibro-osseous tunnel. At the medial plantar foot, just plantar to the navicular and medial cuneiform, the FHL can be palpated as it traverses the knot of Henry. Distally, the FHL is palpated as it travels between the sesamoids.

The FHL stretch test evaluates the influence of the FHL on first MTP motion; a positive finding is suggestive of “pseudo hallux rigidus”. This test is performed by assessing first MTP motion in both in maximal plantarflexion and moderate dorsiflexion of the ankle. To perform the test properly, the first metatarsal (MT) head should be stabilized to prevent compensatory first MT head plantar flexion. A positive test consists of discomfort at the first MTP or a decrease in first MTP joint motion by 20 degrees with ankle dorsiflexion.

To assess the effect of the FHL on IP joint motion, place the ankle in a neutral position and stabilize the first MTP joint; limited motion at the IP joint is suggestive of FHL tenosynovitis at the level of the sesamoids.

Radiographs are obtained to evaluate a bony source of pain. A lateral radiograph can identify an os trigonum. Ultrasound can demonstrate fluid within the FHL tendon sheath, swelling of the tendon, and longitudinal split tears. However, ultrasound is less sensitive then MRI and accurate interpretation requires an experienced user. MRI can confirm the diagnosis of FHL tenosynovitis by revealing excess fluid around the FHL at the fibro-osseous tunnel. MRI is a sensitive tool but still may miss pathology such as tendon tears near the knot of Henry.

Most authors recommend 6 months of non-surgical treatment prior to consideration of surgical intervention. Various treatment protocols have been described and typically involve rest, NSAIDS, immobilization in a neutral position, and gentle stretching. Success of non-operative measures has been disappointing with failure ranging from 40-100%. One of the more successful non-operative treatment protocols is as follows:

FHL stretch exercise: Patient stands facing the wall with a book placed under the hallux. While keeping the heel on the ground, the ankle is maximally dorsiflexed by bending the knee. This position is held for 10 seconds and repeated 10 times, with each set of ten being repeated 3 to 4 times daily.

Immobilization: A walking boot is utilized as a night splint for 6 weeks. If symptoms fail to diminish, a walking boot or short leg walking cast (extending past the toes) is used full time (23 hours/day) for 6 weeks. Both forms of immobilization are used in conjunction with the FHL stretch exercise.